Trump’s Shutdown: What We Learned 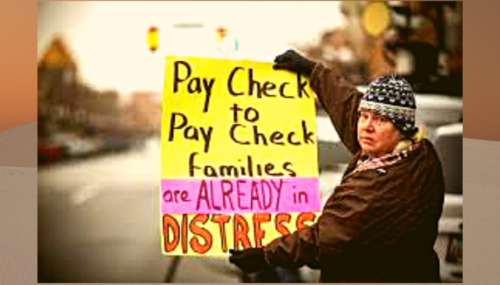 Emboldened white supremacists have assassinated random Black people and Jews, and hate crimes are up dramatically.  Our countries is embroiled in more wars than most people can keep track of – in fact we are in a state of permanent war, without end.  An opioids crisis manufactured by big pharma bribes and lies has produced drug lord billionaires (the legal variety) and tens of thousands of deaths of our peoples.  Fires, droughts and record storms signal climate disaster. Inequality is at a record high, Black and Latino and poor folks face a drastic housing crisis in the cities, and health care costs spiral out of reach of working class people.

Somehow President Trump has discovered the real problem: a few thousand migrants fleeing corporate devastation, criminal violence, political persecution and environmental disasters in their home countries, who come here for their family’s safety and are willing to do such dream jobs as cleaning the gold-plated toilets at Trump’s Mar A Lago.  The President willfully ignores the source of mass migration is often in US policies of intervention and exploitation of the global south

For this Trump shuts down the government to build a Wall on the Southern border?

The shutdown is unpopular, largely blamed on Trump and the Republicans, and nearly 60% of the American people opposed funding for a Wall, for different reasons.

The current shutdown crisis provides a glimpse into the current state of affairs in our country and the anti-Trump United Front that is fighting the New Confederacy.

The shutdown has damaged Trump and the New Confederacy which he leads. The notion of people being forced to work without pay violates a simple fairness standard that Americans hold to: if you work, you get paid, and if you work hard, you can get ahead. The latter is one of the great foundational myths of American politics identified by W.E.B Dubois as the American Assumption.  The Shutdown even peeled off some of Trump’s “base”, centered on the 1/3 or so of the electorate which is largely supportive of white supremacy and existed long before Trump – and will exist when he is gone.  The minority of this group that is not hard-core gets that people should not be made to work for nothing.