“This is Bigger than Football…”

“I am not going to stand up to show pride in a flag for a country that oppresses Black people and people of color. To me, this is bigger than football and it would be selfish on my part to look the other way. There are bodies in the street and people getting paid leave and getting away with murder.” Colin Kaepernick, August 2016

I’ve been watching NFL since I was nine years old. The team I root for just won the Super Bowl. Even in the years I was not a fan for a team (1995-1999), I still watched the Super Bowl.

I will never encourage anyone (let alone those I love dearly) to play football because I know firsthand the damage football does to the body, mind, and soul only after eight years of high school and NCAA Division III college ball. Don’t get me started on the topic of the physical and mental trauma of football – a sport that still occupies a special place in my heart.

I don’t run from any of the contradictions that football brings to my life.

I know that the thought of not watching NFL football – particularly as the weather gets cold and dark in the northeast region of this land people call the U.S. – is actually difficult to bear. Actually doing it is at a whole other level.

This is a struggle many of us who have a deep (and even contradictory) love of football must face.

Which side are we on? 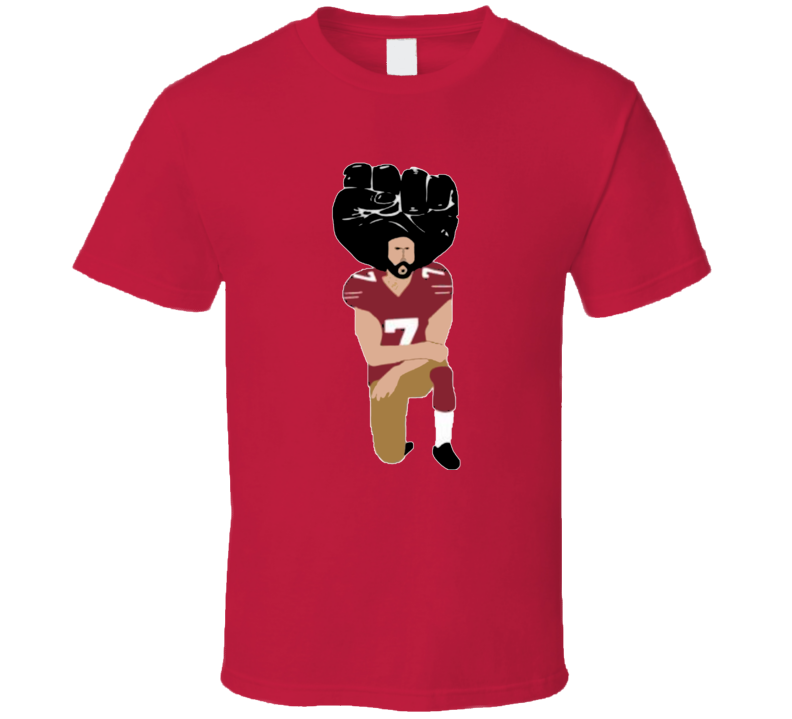 Well, for me, let’s just say I’m really happy this “United We Stand with Colin Kaepernick” t-shirt finally got delivered because I ordered it weeks ago.

And just so I’m clear, I’m wearing this T-shirt because:

I’m against the police murder of people of color, the LGBTQ community, our youth, our children AND not having justice from the white supremacist system that permits and encourages this terror to continue. Let’s not forget that this is the ORIGIN of Colin Kaepernick’s action of kneeling during the national anthem.

I’m standing with Colin Kaepernick (and also his original motivation to kneel during anthem – SEE 1) above) and thus, I’m against the passive aggressive (AND covert aggressive) white supremacist culture of the NFL corporation that is keeping him an unemployed quarterback.

The NFL Corporation is upholding the oppressive system that not only leads many workers (in this case, football players) to be silenced, but also often leaves them physically debilitated with no means or plans for care.

TRUMP IS ANTI-WORKER AND WHITE SUPREMACIST:

I’m standing against Trump for calling on these entertainment workers to be terminated for expressing their rights to free speech in defiance of white supremacist terror. This is anti-worker and white supremacist.

I’m standing against the NFL owners, general managers, and coaches who, on the one hand, want to condemn an NFL outsider (i.e. Trump) for calling on them to terminate their workers, while on the other hand, have passively and covertly denied (and continue to deny) Colin Kaepernick employment – again because he decided to stand up against the police terror killing people of color. This is also anti-worker and white supremacist.

I’m standing against an industry that silently approves of the abuse of women, especially women of color, by openly employing the men who commit the abuse. This moment highlights that male workers’ right to free speech is more important than the right a woman has to live with dignity and to exercise her right for justice, her body, and her economic security. All of this is inherently denied when the NFL, and other entertainment industries, don’t take a stand for women’s rights against the male workers that commit abuse.

I’m standing for people who use this political moment to have conversations with their family and friends about the impacts of patriarchal white supremacist capitalism and all of its contradictions. Also, for the people who use this moment to activate and organize people towards a much bigger vision of toppling the system so that workers of all kinds and women from all walks of life can live in a more just society that seeks to foster and honor their contributions rather than exploit, ignore and/or monetize them.

I’m not afraid of contradictions, holding them when necessary, and taking a stand in the midst of them.

I love Football, BUT I love Love, Liberation, and Creation MORE.

Whitney, my fellow comrade and football fanatic (i.e. Green Bay Packers) helped me write this piece, especially points, 5, 6, 7, and the additions I made to point 3.