The Struggle for Healthcare in Historical and International Context 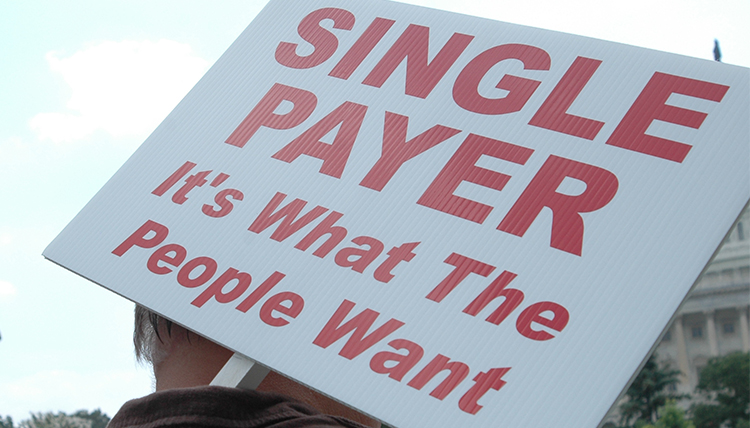 This piece was written in 2009 and is just as relevant almost ten years later.

The struggle for universal healthcare in the U.S. has been long and difficult.  Since the late 1800s, there have been multiple efforts at reform and revolutionary change.  They have been met with much resistance from all sides, for various reasons.  Some of the arguments have included:

Currently, the reaction from the extreme right is cause for much alarm. Recently a sign at a town hall meeting calling for the death of Obama, Michelle, and “their stupid children,” and gun-carrying protesters signify an emboldenment of the reactionary forces.  Despite the current manifestation of this backwards and violent upsurge, the movement that labels a national health care program as Nazi, fascist or Stalinist is not new. In fact, in part because Germany was one of the first countries to enact national healthcare, and Germany was fascist (although not when universal healthcare was enacted), there has historically been a knee-jerk reaction in the United States that equates universal healthcare to fascism.  Although inaccurate, incomplete and dangerous, this analysis is compelling to many people.

History of the Struggle for Healthcare

It is interesting to note that when universal healthcare was put into law in Western Europe, the purpose was to suppress social unrest.  The industrial revolution meant a move into the cities, into cramped living and working conditions.  Europe was on the brink of revolution at the time, and the governments of England and Germany wanted to guarantee healthy, happy workers who would not revolt.  The United States was not experiencing the same level of fight back from oppressed workers.  The government did not feel as threatened, and therefore, saw no need to provide healthcare for everyone.

In the past, an additional oppositional force was the American Federation of Labor.  Unions were concerned about losing their role of providing a social safety net, and a location from which to struggle.  Those concerns were alleviated by the passing of collective bargaining legislation.

The public health care programs that we do have were not easily won.  Indeed, Social Security was seen as socialist, but was passed because of the strength of the labor movement and the context of the economic depression.  It was not until 1965, 30 years later, that Medicare was passed.  There was intense industry and governmental opposition to the plan.

All of this is backdrop for today’s battle.

While the healthcare debate rages on, again, after many rounds, other countries sit back and look at the spectacle of United States healthcare politics.  In turn, let’s take this opportunity to study some of the national health care programs in other countries.  We will see that a national healthcare system is not an impossible goal, is not only in place in socialist countries, and it will not, by itself, lead to a socialist government.  The right wing will have us believe that providing healthcare for everyone will actually turn us into a socialist country.  Oh, that it were that easy.  The following are examples of a variety of economic and governmental structures in which universal health care is provided.  The following is taken in part from the Physicians for a National Healthcare Program website (www.pnhp.org).

Australia is a member of the British Commonwealth, and a strong ally of the United States.  It is a capitalist country.  Once universal health care was enacted, it was not secured in Australia.  The system was re-privatized for a while, and then in 1984 Medicare, the national health insurance program, was signed into law and has been in place ever since.  The government administers the compulsory national health insurance program (Medicare).  In addition, private insurance covers 1/3 of the population.

National health insurance (Medicare) is a public program administered by the provinces and overseen by the federal government. Medicare is funded by general tax revenues. In addition, the majority of Canadians have supplemental private insurance coverage through group plans, which extends the range of insured services, such as dental care, rehabilitation, prescription drugs, and private care nursing.

Cuba is the only socialist country highlighted here.  It has a national health service.  Services are available without charge to everyone.  They are provided by salaried personnel in facilities run by the government.  Patients have access to 24-hour, neighborhood doctor and nurse teams (1 doctor-nurse team per 120-170 patients).  If necessary, patients are referred to multi-specialty clinics (“polyclinics”) and/or hospitals.  A patient may change their GP to a doctor in another neighborhood.  Physicians spend their mornings in their practice and their afternoons making house calls to the elderly and the infirm.  Every patient is seen at least twice a year, either by coming into the clinic or by a house call from the physician.

The country has had a national health insurance system since 1928, but universal coverage was not established until 1978.

The system is financed through income taxes.  People chose their doctor.  Recently some reforms have been put in place to stave off rising costs.  It is still one of the most comprehensive healthcare systems in the world.

As mentioned above, Germany was the first country to establish the foundations of a national health insurance system, in 1883, and has since gradually expanded coverage to over 92% of the population.

Everyone in Germany is eligible for health insurance, and individuals above a determined income level have the right to obtain private coverage.  The German health care system is funded by compulsory payroll contributions, equally shared by employers and employees.  The rest of the population (the affluent, self-employed, and civil servants) is covered by private insurance, which is based on voluntary, individual contributions.

All medical and nursing education is free.

Investor-owned for-profit hospitals are prohibited in Japan.  Patients are free to choose their ambulatory care physicians.  Due to the combination of medical and pharmaceutical practices a large part of a physician’s income is derived from prescriptions.  Hospital physicians have fixed salaries.

Taiwan—the capitalist defector from the People’s Republic of China—moved from a system with multiple insurance companies, like the United States, to a single-payer system with no measurable increase in costs, while insuring more than 8 million Taiwanese citizens who previously lacked insurance.  While utilization did increase, its costs were largely offset by the enormous savings under single-payer.  Taiwan also did not report any increase in lines or waits for services.

The British government is a purchaser and provider of health care and retains responsibility for legislation and general policy matters.  The National Health Service is funded by general taxation and national insurance contributions and accounts for 88% of health expenditures.  Physicians are paid directly by the government via salary, capitation, and fee-for-service.  Private providers set their own fee-for-service rates but are not generally reimbursed by the public system.  Specialists may supplement their salary by treating private patients.  Hospitals are mainly semi-autonomous, self-governing public trusts that contract with groups of purchasers on a long-term basis.

There are about 40 more where that came from. None of these healthcare systems are perfect. There are different variations on the theme, and differing levels of government vs. private funding of the system. One thing is common, though– in all of them, seeing a healthcare professional is guaranteed, and people are not dying in the tens of thousands each year because of lack of access to treatment.

Sarah Jarmon lives in San Francisco.  She has organized around the Prison Industrial Complex for years and is part of a local grassroots electoral project now.  Sarah studied public health and brings that perspective into all of her work.