Puerto Rico and Hurricane María: A Human and Environmental Catastrophe of Colonialism

Bruce Hobson interviewed María Rosado, a young professional actress with a chemistry degree from the University of Puerto Rico, and a theater degree from Brown University, about the situation in her home country one year after the devastation wrought by Hurricane María.

Her views reflect the cross-class understanding of the colonial treatment of the island by the US, sharpened by the cruel and callous US response to the disaster.

This interview was conducted originally in Spanish and is available here.

B: The corporate media of the United States considers it neither interesting nor necessary to give current information about the situation on the island. This gives the impression that everything has returned to “normal.” Your perspective?

M: Puerto Rico has not returned to “normal!” Puerto Rico is not the same as before the storm in spite of the fact that power in many places and some services have been restored, some people have returned to work, and some students are back at school.

B: How are working people faring?

M: In San Juan things now are better than right after the hurricane. But in other cities and in the countryside, there are many that still don’t have electricity, or only intermittently. Many are without water that’s safe to drink. And there are people, especially in rural areas in the mountains, that do not have access to basic medical care, and who have next to no economic resources. The economic infrastructure is so deteriorated that, even in San Juan, the city may seem to be functioning, but the fact is that many schools remain closed, houses are destroyed, jobs are gone. Many who have small businesses are able to function only with portable generators.

There’s been so much sacrifice. People have lost so much. And now we’re in September, a year after the hurricane, and this year’s hurricane season is just beginning. We still are struggling to rebuild our country, and we are certainly not prepared for another one!

B: María, the population on the island is around 4 million, and something over 5 million Puerto Ricans live in the USA, right?

B: I understand that over 200,000 people from Puerto Rico – 5% of the population – fled to Florida after the hurricane. This is like people escaping war!

M: Especially in the first months after the hurricane, for people who had no opportunity for work, they had to leave. Not so much to escape, but to find possibilities to continue their lives elsewhere. Everyone needs to survive. The USA has been where many Puertorriqueñ@s have tried to experience the American Dream. Many Puertorriqueñ@s go to Florida because it has a tropical climate they are used to, and because there have been established communities of Puertorriquen@s there for the last century.

There are also Cuban and Dominican communities in that state, so they’re able to navigate the social environment without necessarily knowing English. They also may have family there, so they have somewhere to stay and get help.

B: New York, New Jersey, Chicago have brutal winters; and yet Puertorriqueñ@s have been established in these states for many decades.

M: People who went to NY during the diaspora of the 40s found employment in factories, on the docks. Over the years they have established their own communities, and many of course have remained.

B: Who on the island, whether opposition political parties such as the Puerto Rican Independence Party, or community-based organizations, is organizing to better conditions for your people?

M: The people who are struggling for Puerto Rico aren’t necessarily from political parties. After the election of Trump and Rosello (the governor of Puerto Rico and a solid Trump supporter), people have organized in independent associations and in labor unions. Many of these are people who have for years engaged in strikes, have supported student movements and teachers. Because neither the US nor the Puerto Rican government were helping the displaced and dispossessed, community people stepped up to do what was needed.

For example, my brother, who is a medical student, has dedicated time for years working in poor rural communities. After the hurricane, he and other groups began to organize free health clinics, and for months after the disaster they organized medical brigades visiting villages and towns throughout the island providing needed services. In my view, those who have done the most are the people themselves who have said, “We’re not going to wait for the government!”

B: So, support didn’t come from either from Trump, nor Rosello nor FEMA.

M: That’s right. It’s not to say that these governments did nothing, but they delayed so long and gave so little, the Puerto Rican people said, “This won’t do, this is not enough.”

B: I recall the press conference with Trump and Rosello where Trump, with a smile on his face, declared that there were just 16 deaths after the hurricane. Did that reflect the reality or “fake news?”

M: The reality is that the majority of the deaths from the hurricane occurred weeks and months afterward. Deaths from infection, from contaminated water, lack of medical services, dialysis was unavailable, no oxygen tanks, no refrigeration. There was more death and destruction than the either government wanted to admit. This is the reality. Our government ultimately had to admit, one year after, that the number of deaths was 2,975! If more aid had come right away, many of those deaths would have been preventable.

B: It’s understood that Puerto Rico is politically and economically dependent on the United States; that is, it is effectively a U.S. colony and has been for the last century. Here is another example of how the US under-resources and mismanages the island; it demonstrated that it does not care about the Puerto Rican people. So, did the hurricane make you and others think about independence for Puerto Rico?

M: The issue of independence is complicated. The fact is that besides independence, some believe in charity, others believe we should have become a state. But from my perspective, the discussion isn’t only about whether Puerto Rico should be an independent country. Over time I’ve come to believe that while there is much work ahead to improve the lives of the Puerto Rican people, I also realize that so much of our economy and our culture is tied to United States. I can’t say that one or the other direction is right for Puerto Rico. Our economy is filtered through the US economy, and many people still depend on the financial supports and the jobs provided.

From the US side, the reality is that the United States is also dependent on Puerto Rico. This can be seen by the fact that so much US industry goes to Puerto Rico, that the law protects these industries, that they pay little or no taxes, they thrive on cheaper labor, and capital generated by that labor is taken to the United States with little left behind. There are US industries who make all their profits in Puerto Rico. Neither side is ready to cut the ties.

B: Some of these industries also have direct access to natural resources of the island.

M: Exactly. And considering that the minimum wage in Puerto Rico is only $7.50, many working people cannot survive economically. I think that we’re in a critical moment, now after the hurricane, the government is squeezing us for as much as they can get, and for that reason we’re in the situation we’re in.

María says that this is “a critical moment.” The hurricane and the US response has deepened people’s consciousness that they are disposable as far as the US government is concerned. It seems like the time is ripe for progressives and the left to build on that consciousness to organize both for more control over the island’s own resources, and for significant improvements to the amounts and the ways that U.S. dollars are spent in Puerto Rico. Will humanitarian aid efforts turn to political organizing? The struggle continues!

AgitArte is an organization of working class artists and organizers who create cultural solidarity  projects and programs in grassroots struggles against oppression, and propose alternatives that generate possibilities for transformations in our world. We initiate and lead community-based educational and arts programs, along with projects that agitate in struggles for our liberation. We ground our work in the intersectionality of oppressed identities and position ourselves in the longstanding fights against patriarchy, imperialism, capitalism, and white supremacy for the emancipation of our peoples.  AgitArte does much of its work in Puerto Rico.

Last month, AgitArte shared the End the Debt! Decolonize! Liberate! scroll in several locations throughout the main island of Puerto Rico, in recognition of the one year anniversary of Hurricane María and the 150 anniversary of Grito de Lares. The tour included the home of Filiberto Ojeda Ríos, leader of Los Macheteros and Fuerzas Armadas de Liberación Nacional (FALN) who fought for Puerto Rico’s independence from the U.S. Filiberto was assassinated in his home in 2005 by FBI agents. Today, the house is still covered in bullet holes, the scars of U.S. oppression and the choking of liberation movements in Puerto Rico.  http://agitarte.org/un-ano-tras-el-huracan-maria/

See examples of their work below: 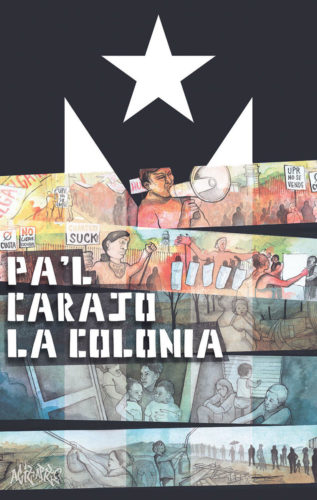 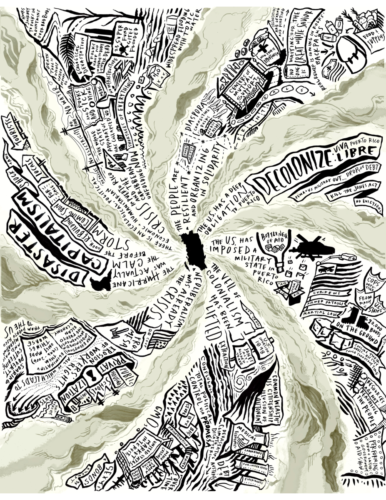