Joe Navarro wrote this poem in June 2014 to commemorate the passing of Karega Hart, a beloved comrade and lifelong revolutionary. 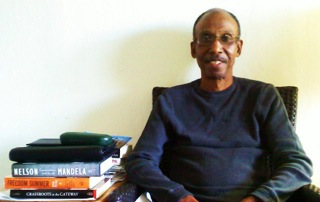 Anyone who knew Karega
Knew that his baritone voice, even though soft,
Was full of courage and commitment.
His even tone, calmly, but articulately
Addressed injustice and national oppression
With working-class charismatic humility.

His revolutionary passion, embellished
With socialist compassion, condemning
Those blood-sucking capitalists,
Even in his poetry. From the
Assembly line to the bus line
Karega organized for peace
Equality, Justice and Socialism.

From the point of production
On the factory floor to
The point of understanding how
Systemic oppression undermines the physical
And mental health of human beings.

That was Karega. A father and grandfather
Who believed that we could live
In a better society that was driven by
Human need instead of corporate greed.
That’s the world he wanted for his family.

He is the spirit that
Lives in my heart and soul, because
He was always a compass for human dignity.
It’s nation-time…if justice cannot be achieved.
Liberation for the Black-belt South,
Ending police violence,
Self-determination,
Self-defense,
Freedom!

That was Karega. Even in his poems.
If you are man or woman, African-American,
Chicano, Latino, Native-American,
Asian, immigrant, poor, working-class,
Karega stood with you, side by side.

That was Karega. A revolutionary
Who broke-it-down, from
His heart, explaining why capitalism
Is contradictory to democracy,
Self-determination, human and civil rights.
His soft spoken humility was always
Overshadowed by his revolutionary prowess.

…From his heart…that was Karega.
Whose love for humanity,
Drive for human dignity,
Vision for a better world…
Lived his life as he spoke it.

That was Karega, my brother, my comrade…
Who leaves a void in my heart,
But whose revolutionary insights
Will remain etched in my mind
For as long as I live.