#Juneteenth: Look at the Past to Find Our Way Forward 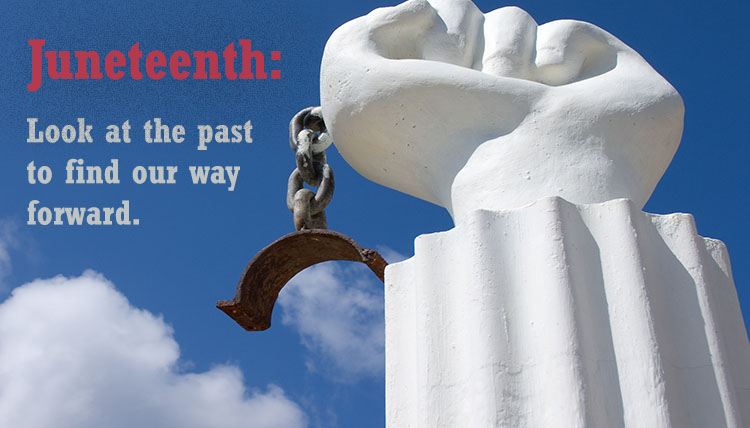 Donald Trump has been in office for 149 days. This is a clear victory of the New Confederacy. At the national and state levels, this represents a few things:

In this document, we intend to bring context to this historical moment and clarity with regards to your role in the titanic struggle for Black emancipation.
***

A brief sketch of the New Confederacy

Liberation Road/El Camino Para La Liberación has identified the New Confederacy as the primary enemy in this moment. The New Confederacy is an alliance of center-right neoliberals, Christian theocrats and white racist nationalists. The New Confederate reliance on white supremacy, patriarchal violence, and a Southern geographic base of operations all have their historical roots in the old Confederacy. But unlike the Confederacy of old, the New Confederacy, as the organized alliance of the most reactionary sections of U.S. capital, has housed itself in a different political instrument than its predecessor: The Republican party. Alliances are inherently fractious, and only one section of an alliance leads at any given time. Donald Trump’s victory, the present united federal government under Republican rule and their capture of all branches of government in 25 states (compared to the Democrats’ 6) indicates that the racist nationalists have won control of the alliance. Integral to the maintenance of the New Confederate alliance over the last half century is the centrality of anti-Black racism.

In the face of this New Confederate onslaught, we have a resurgent Black radicalism, one that has forced the entire politics of state violence to the center of discussions of patriarchal subordination, energy extraction, social privatization, and racial domination. Historically, Black radicalism has been the defining political orientation that has pushed the whole of U.S. society in a progressive direction. 19th century anti-slavery and abolitionist movements led the Union to a triumphant victory over the Southern slave system. 20th century Civil Rights and Black power movement-building led to the destruction of Jim and Jane Crow and created a template for mass movement building in the heart of the U.S. empire, while Third World liberation struggles increasingly contested ruling class hegemony the world over. In response to the major victories of the Black freedom movement, various sections of the ruling class aligned to co-opt, repress, target, buy off, sedate, and eliminate leading forces in the movement. Black people have struggled with the consequences of this state-led class offensive ever since. With the onset of the Great Recession, these various Black radicalisms have since re-awakened and re-emerged into a movement for Black freedom.
Today, the movements against both mass incarceration and state sanctioned violence, in general, threaten the mass incarceration and criminalization complex. In history, it is Black people who have unified large sections of society to destroy chattel slavery, to increase who is eligible to participate in elections, to break the rule of Jim Crow, to win more agency and recognition and representation of our full selves. And, while Black political movements are usually multiracial coalitions, it is of paramount importance to note that it is Black people in general and oppressed genders that have won these monumental victories for the cause of justice.
These towering, democratic achievements were made possible because of intensive, rigorous, decades-long work aimed at purposefully designing and generating social movements: movements that intentionally cohered the largest set of social forces against the narrowest target at any given moment in time. This is what it means to build a united front. This intentional coherence of millions of people to act politically is a historical method and strategic principle that throughout world history has been used to win revolution. It is our orientation that for revolution to happen, it must be built by the masses of people under the leadership of Black people, people of color, and the rest of the working class. Black people constitute the leading edge of the key social force that must lead the construction and maintenance of a revolutionary united front.

Why do we celebrate Juneteenth?

Juneteenth is the oldest known celebration commemorating the ending of slavery in the United States. Dating back to 1865, it was on June 19th that the Union soldiers, led by Major General Gordon Granger, landed at Galveston, Texas with news that the war had ended and that the enslaved were now free. This was two and a half years after President Lincoln’s first limited Emancipation Proclamation – which had become official January 1, 1863. The Emancipation Proclamation had little impact on the Texans due to the minimal number of Union troops present to enforce the new Executive Order. However, with the surrender of General Lee in April of 1865, and the arrival of General Granger’s regiment, the forces were finally strong enough to influence and overcome the slavocracy’s resistance.
The Black struggle for freedom in this country has always required organizing, policy changes and action. The culture we are building in Liberation Road is one that appreciates a plurality of tactics. We have watched, taken leadership from, and worked side by side with the leaders in this current iteration of the Black freedom struggle. For example, on this June 19, 2017, our members will be participating in the Black Land and Liberation Initiative’s Day of Reclamation. Juneteenth serves as an important reminder to us about the imperative of political organization. Even after the policy change was made legal to free all enslaved Africans, it took TWO and a half years for them to be freed. Winning Black freedom in the 21st century will be complicated, especially under the rule of the New Confederacy. But Juneteenth also reminds us that we have already done it once, so we can do it again!

What must Black people do?

Black people must lead. Our leadership must be carefully and compassionately cultivated. The New Confederate rule in this country is particularly explicit and detrimental. We face attacks on public goods like water, land and education, increased military expeditions inside and outside of the U.S. nation state, attacks on immigrants and Muslims, attacks on domestic and home care workers’ rights, salvos against student agency and dignity, continued campaigns against trans and gender non-conforming folks, against our historically black colleges and universities and our right to vote, against our families via ICE and against our own bodies via the police. The list goes on. We aim to unite the brightest and bravest Black revolutionaries of our time around the idea of political organization, collectively develop our leadership, compassionately struggle with each other, and courageously lead the fight to bury the New Confederacy.
As Black Marxists, we understand that history is not simply progress, but both progression and regression. To radically transform existing society, we must be rigorous about the necessity of having:

1) a revolutionary vision for society
2) a powerful instrument with which to pursue that vision
3) many millions of people to help build that instrument (starting with you!)

Our task as socialists and communists is to move millions of people into political action. That means uniting broad sections of the advanced organizers and leaders in the Black freedom struggle around the importance of both a revolutionary united front strategy and independent political organization. It means having a courageous strategy rooted in the South with the aim of the total and complete destruction of the misogynistic, white supremacist rule that is today aligned under the regime of the New Confederacy and the leadership of Donald Trump.
**********
The way to end climate catastrophe, patriarchal domination, economic austerity and systemic violence (policing, healthcare etc.) is through building the political power of the working class and oppressed people.
JOIN US!