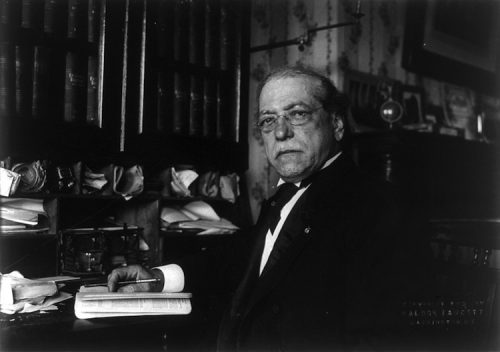 The American Federation of Labor (AFL) leader for most of the early 20th century was Samuel Gompers, an English immigrant cigarmaker.  His strategy and method of unionism was so well-established that it has since been termed “Gomperism.”

Gomperism is commonly known as business unionism.  In the main that usually means focusing on the immediate needs in the workplace, and purposefully ignoring larger societal, non-union needs.  Traditionally, Gomperist unionists were against legislation that would raise the minimum wage or establish pensions, unemployment and health care.  Those were the benefits achieved by joining a union.

At the same time, the AFL under Gompers was hardly apolitical. While its main rival, the Industrial Workers of the World (IWW) loudly opposed US entry into WWI—it was a war between “rival capitalists”—the AFL took the side of the government, displaying no solidarity with their union brothers and sisters. They watched (and perhaps assisted, considering they later cooperated in the J. Edgar Hoover-led Red Scare raids) while IWW leaders were jailed, beaten, and rounded up. In foreign policy, Gompers put his weight behind the Pan-American Federation of Labor.  Staunchly anti-communist, the PAFL tried to impose business unionism south of border and at the same time show US-based employers who were expanding overseas that they would be reliable partners in labor stability. This foreign policy trend accelerated and remained a feature of US labor until the early 1990s.  Some would argue it has not changed at all.

So if you’re wondering if your union is rejecting, slightly leaning towards, or barreling full steam ahead towards Gomperism, take this quiz to find out!

1. On the Employee Free Choice Act my union leaders . . .

a. Are ready to get in the streets and fight for it, are recruiting volunteers to canvass neighborhoods and stand out in front of local supermarkets, and are reaching out to other unions in the area to hold a rally.

b. Issued an official statement in support of the Act but have said we need to let our national officers work their magic with Obama and we shouldn’t rock the boat.

c.  Said they support the Employee Free Choice Act but are suddenly remodeling the office with materials from Home Depot.

2. The last time my union negotiated a contract, our union leaders . . .

a.  Called for members to take more militant action when negotiations stalled.

b.  Liked to visit the “concession stand” regularly and brings workers back a lot of junk.

c. Spent five minutes slicing and dicing in the conference room with the bosses, and then went out for drinks. With the bosses.

1. Say single payer is the only reform in health care that has mass support.  We have plans to take action and build up the movement for single payer. In fact, the local has joined the Labor for Single-Payer/Medicare for All Coalition.

2. Say, “Our members are satisfied with the union-negotiated healthcare plan that takes more than 10% of their paycheck each month.”

3. Originally said they back single payer healthcare. But now they say, “A mix of public and private reform is a giant step forward.” We don’t know which giant they’re referring to.

Layoffs are hitting pretty hard.  Everyone is scared.  In the midst of this, some young workers, predominantly Latino/a, Caribbean, and Middle Eastern, have come to your union for help.  There is a lunch time discussion about what to do.  Some of the folks in the discussion are elected leaders. They say. . .

a. Yes we need to take initiative to organize laid-off workers.  This is going to be a growing sector during this time of economic crisis.

b.  Sure, everybody should be in a union.  But right now we need to be sure Americans have American jobs.  I say give them the phone number for union X’s (a union that by general agreement is a do-nothing organization) and send them on their way.

c. We can’t organize these folks!  We have enough to do keeping our own members working.

At the union meeting, several people have tried to get a resolution condemning the surge in troops to Afghanistan.  That resolution is modeled after the one put out by US Labor Against the War. After much wrangling, the resolution has gotten on the agenda.  Does the union president say:

a. I know it sucks to oppose our friend-of-labor President Obama.  But our economy is in the toilet, the Iraq war cost us a bundle and look what we got out of that.  We need that money here at home.

b)  I can’t believe you all even voted to let this on the agenda. This has nothing to do with work.  We are in a military crisis of our own here.  We’d better spend our time on that rather than arguing about foreign policy.

c.)  We support our President and our troops. End of conversation. Osama is still hiding out there.

If you got mostly “A”s: Congratulations, your union is a Gomper-Stomper! Your union leadership prioritizes rank and file needs, does not underestimate the importance of direct action, and has little to no interest in making deals with the corporate machine. Even better, they seem to get the idea that unions need to be advocates and defenders of the working class, unionized or not.

If you got mostly “B”s: Your union leaders are playing in the Gomper Room! They can’t seem to make the move off the capitalist playing field, even as they know they have to back the members.  But since they aren’t totally entrenched, you have some openings.   Which means there’s still time for you and your members to organize for better internal union democracy, and a program that works for both your union and the working class as a whole.

If you got mostly “C”s: Sorry, your union is the Gomperist. You can’t even trust them on their word. You have your work cut out for you.  You’ll probably need to hook up with other unionists and activists outside your union—like Jobs with Justice for example—to help you get the job done.

Elly Leary is a retired union officer, union negotiator, and labor educator.  Right now she is living a retiree’s dream—playing tennis and golf and working with a new generation of working class activists.