Ethnic Cleansing and the War on Immigrants: A Program of Resistance

The US has never welcomed non-white, non-European immigrants. It was under President Obama that deportations reached an all-time high.

But today, the Trump Administration has made the demonization of migrants, particularly those from Mexico and Latin America, its main political rallying point, and has ramped up an ethnic cleansing campaign aimed at the forced removal of more than 11 million undocumented workers from the US.

While the overwhelming majority of this population is Mexican@, it also includes significant numbers of Centroamerican@s, Asian, and African peoples, and even 500,000 European immigrants. To gain public support for his policies, Trump foments fear of the “other.” Immigrants are painted as criminals, terrorists, rapists – sub-humans looking to harm “real” Americans. When the public is taught to fear and hate, the doors open to ethnic cleansing.

Trump also aims to prevent new migrants from entering as a way to “make America white again.” In June, Trump decided to rip 3000 children from their parent(s) as a way to “punish” those asylum seekers who have the audacity to think that the U.S. might grant them safe haven – even though this is U.S. policy!

Overwhelmingly, these migrants do not simply seek economic refuge; they carry evidence proving that their lives are in danger from criminal or domestic violence in their home countries.  Threats to harm a child if a parent does not cooperate is political terror — it is a form of torture.

Fortunately, these heart-wrenching violations of human rights inspired broad and sustained resistance throughout the US, spearheaded by Chican@/Mexican@s and Latin@s, and include a broad cross-section of the US population, from Black Lives Matter, to elected officials, to media personalities, to labor unions, indigenous networks, and even the Prime Minister of Canada, who has said that his country would accept these refugees.

Though public outcry and a court order forced Trump to reunite the children with their families,  the weeks and months of separation will leave these children with lasting psychological damage. While few are still paying attention, many children remain “misplaced,”  are still in for-profit detention centers, and unknown numbers of parents have already been deported without their children.

In November, the Trump Administration again ramped up its ethnic cleansing campaign. It sent thousands of US troops to the US-Mexico border, with orders to use deadly force if they believe it is necessary, to stop several refugee caravans from entering the US. The caravans consist of thousands of men, (and mostly) women and children seeking safety in numbers by traveling together from Honduras, Guatemala, and El Salvador to seek asylum.

Again, thousands of US Latin@s  and their allies have come to the defense of the refugees as have masses of people throughout Mexico.  Manuel Lopez Obrador, the progressive newly-elected president of Mexico has also stated that the refugees will receive support from his government in their efforts to win asylum in the US.

If Trump’s intent to end Latin@ immigration succeeds, human rights and civil liberties are up for grabs for all of us.  Trump, with the full support of right-wing forces in Congress and the “Justice” Department, has chosen his strongest line of attack on our democracy at the border, and he must be defied. The Left must dig deeper and fight to end all of the injustices embedded in US immigration and refugee policies. 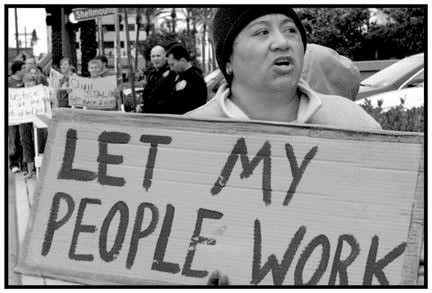 The ultimate goal of Trump and his New-Confederate supporters is to institutionalize an apartheid system in the United States. We already have a highly racially oppressive and unequal society. But we do not have apartheid, a racially based system where a white minority exercises political, economic, and cultural dominance over a non-white majority population. We will inevitably become a majority people of col- or nation, and that’s when apartheid could be fully institutionalized. The white supremacists in power are preparing for that day.

Maintaining supremacy will require a massive repressive apparatus and that is being put in place; the agenda of the Right is to defund social programs while increasing expenditures on policing and the military. It also requires the dismantling of democratic processes.

The attacks on voting and other civil rights specifically targeting people of color is laying down more prerequisites to apartheid. The dehumanization and demonization of people of color is another important ingredient, and hatred and fear are powerful weapons in the arsenal of the racist Right. The carrot element of the carrot-and-stick strategy to pacify people of color has been abandoned, as is painfully evident with the Trump/Right ethnic cleansing campaign. The radical Right is ascendant, and now we are getting the stick: they mean us serious harm.

But as people of color become a majority, we are going to be a very angry majority. A majority situated strategically economically and politically. A majority with immense potential networks in the global South. A majority with vast experience of struggle in virtually all arenas.

Unless the ruling class completely abandons all pretense of democratic governance, for example outlawing elections, the electoral arena will become an even more highly contested arena of struggle. Our populations are young. Increasingly large sections of our population can vote. We are situated in crucial areas of the South and Southwest, as well as other areas. The Asian Pacific Islander populations are the fastest growing of all, with significant concentrations in the Southwest and South. We are undoubtedly a threat.

The choice between barbarism and socialism is more clear than ever, as barbarism is the order of the day particularly for Blacks and Browns. For all who love peace and believe in human dignity, the time is now.

Bill Gallegos is a member of Liberation Road and a veteran activist in the Chican@ Liberation Struggle and the Environmental Justice Movement. Thanks to various comrades for their input.