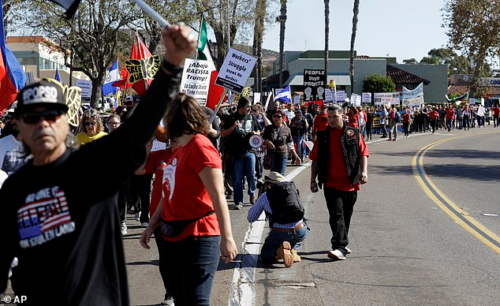 This is written from a cadre that lives in San Diego and has been experiencing and analyzing the events with the caravan at the Tijuana/San Diego border.

As has happened, particularly in European countries, the neo-fascist, right wing have made significant gains by scapegoating immigration and immigrants. With the arrival of the refugee caravan to the San Diego-Tijuana border, this crossing point became ground zero for the contentious political debate sparked by Trump’s racialized fear-mongering (“the caravan has gang members and bad people… it’s an invasion”) in the final days of the mid-term elections trying to prevent an even larger blue Wave.

The San Diego border demonstration and march, part of a national call to action, that took place to support the right of refugees to apply for political asylum was met by an ugly military response.  Military helicopters flew over the demonstration constantly. By the end of the rally they were rolling out razor wire and shutting down the port of entry for 4 hours. I witnessed some 50 vehicles speeding back-and-forth along the border and closing  I-5 and I-805.   It felt like a police state, no mistake. The whole Military-INS mobilization appeared to be designed to intimidate rather than meet any perceived threat.  Some caravan members had attempted to rush across the border when they were tear gassed. They were possibly hoping to be arrested on the US side so as to not endure Tijuana’s dirty encampments while waiting for US asylum hearings. US Immigration is only accepting 100 applications a-day so some of the 4-5 thousands will wait months.

The San Diego rally coalition of some 20 organizations, including Activist San Diego (ASD), pulled off the bilingual mobilization with just 2 weeks preparations. Native Americans and Raza played lead roles in the event and organizing.  ASD provided the sound system and the flatbed truck stage. We handed out 400 fliers for our upcoming event celebrating the social movements that brought MORENA to power — an event intiated by Liberation Road and ASD.

At that event on Dec 2nd at the UniteHERE union hall we managed to get on TV 4 times in 24 hours and brought a small circle of long-time activists together in hopes of consolidating ongoing solidarity work. Among the most gratifying part of this organizing was to have several bi-national/former The Road members join in this effort along with new activists in our recruitment group.